She smiled out through the wet window of the car because the photographer was out there, but it was forced. ‘It’s not supposed to go like this,’ she thought, trying not to let tears ruin her careful makeup.

They’d found the perfect wedding venue, a beautiful Japanese garden with decorative bridges over charming streams near riotous explosions of cherry blossoms. She had the perfect dress; when she tried it on, she had finally started to believe maybe she’d been wrong to think love wouldn’t happen to someone like her.

Her fiancé would look perfect; they’d found a tux in his favorite colors – black with red accents – and he accessorized it with his black fedora and a katana, because he was her perfect goofball. She’d chosen the perfect song to play when her dad escorted her over the winding paths to the gazebo; she’d heard “Longer” by Dan Fogelberg at a relative’s wedding as a child, and the lyrics had permanently stuck in her mind as the ideal sentiment to begin a life together. Even though they didn’t have a large budget, they’d been blessed with help from dozens of friends and family members, and it had all led up to this day…her wedding, that silly girly thing she’d always pretended not to care about, while being secretly afraid to wish for.

It would all be perfect.

Her mom had carefully pinned on her veil with a proud smile. Her sisters and best friends, beautiful in their bridesmaid regalia, laced her into her gown, and she’d felt like a princess. Her dad, at the sight of his oldest daughter in wedding finery, had gotten misty-eyed in a way that made her heart full. There were so many excited butterflies in her torso, she was almost surprised to find her feet still on the floor.

And then… She clenched her jaw, looking upward and blinking fast. ‘It’s like rain on your wedding day,’ she thought, recalling the lyrics to the song inaccurately named “Ironic.” It should have been called, “Things That Suck.”

One of the groomsmen had been measured wrong by the rental shop, and had to scramble for safety pins to keep his tux on properly. The portable stereo worked, the disc was safely inside, and even though her sister’s new boyfriend was miserably ill, he’d diligently gone ahead to set up…and found the power was out, and they had no backup batteries. And to top it all off, a light drizzle had begun just as the last of the wedding party was ready to head over to the venue.

“Do you want to go with the bad weather backup plan and have everybody come back here?” her mom had asked gently. She’d looked out the window, unable to answer. But the rain had lessened just enough to give her hope that it was clearing up, and they’d rushed to the garden. 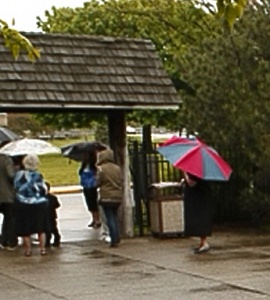 So now, she sat in the back of her dad’s car, listening to the wretched raindrops while everyone else finished getting into place and tried to stay dry. “Rain on your wedding day is supposed to be good luck,” a variety of people said in encouraging tones. She smiled wanly. Easy for them to say. It wasn’t their one chance at a moment they’d been planning and dreaming of for months; it wasn’t them who’d have to drag the most expensive garment they ever owned through the mud, and get a million photos taken of them looking like a drowned rat. She would’ve shaken her fist at the Fates if it weren’t so ridiculously melodramatic.

And then, even though the sky still fitfully sputtered haphazard whispers of rain, it was time to begin.

She got out of the car, her dad anxiously wielding an umbrella, her sisters scrambling to keep her dress off the ground. The last few guests passed by her, carrying their own protection from the weather and trying to smile at her as if they weren’t all being drizzled on. She looked around at the wedding party in their fancy outfits, huddling under any cover they could find.

And suddenly, it all just seemed hilarious.

An unbearable tension in her spine released all at once, and with a giddy euphoria, she thought, ‘This is a silly thing to get upset about. So what if we all get a little damp? It’ll definitely make the experience unique, and I’ll be just as married at the end.’ She gave a radiant smile and, taking her father’s arm, she progressed toward the tiny gazebo where everyone waited.

…and promptly got stuck for a minute, when her dad’s umbrella caught on a tree and showered them both with a fine mist. They both giggled helplessly, and it was amazing and silly and wonderful. Then they reached the gazebo and the nervously jubilant man she was about to marry, After that, it could’ve been snowing and she would never have noticed.

Her brain was fogged with a sort of blissful static. A man said things. They read their handmade vows. Rings were exchanged. Each moment was beautiful and hyper-real, but taken collectively they became a sort of glowing fog of joy. She realized this was the real reason for wedding photographers…because pictures were the only way the bride and groom would be able to remember what happened afterward.

“You’re lucky it’s raining,” the photographer said when it was over. “It may have been a pain to deal with, but the light from a cloudy sky makes all the bright colors more beautiful in contrast.”

And he was right. It was perfect, after all.

With a tender smile, she finished clicking through the old photos on her hard drive, and wiped the corners of her eyes. It wouldn’t do to let anyone catch her – the poster girl for cool logic and anti-sentiment – getting all misty-eyed; they’d think she’d been replaced with a pod person. But even she had her moments; how could she not, when remembering that perfect day? So strange to think it had been exactly nine years ago today; after all the years she’d searched for him, it seemed she’d only found him a few moments ago…and yet, she could scarcely remember a time that he wasn’t at her side.

The years in between had been filled with those familiar wedding phrases that eager lovers rarely pause to consider, and wouldn’t understand even if they did. She remembered a little bit of richer, a lot of poorer…a few times of sickness, but a blessedly large portion of health. They’d held hands as they took their first delighted steps into their new house, another major life event she’d never expected to have. They’d held each other close as they mourned the failure of yet another fertility treatment, signaling that there were some life events that might always remain out of their reach.

And even though it drove her crazy that he was incapable of shutting a cupboard door…and even though it drove him crazy that she insisted he should change into a clean shirt and comb his unruly hair just to go grab fast food…even though they struggled and argued from time to time just like anyone else…he was a constant she could always hold onto in the shifting sands and capricious winds of life. She wouldn’t wish to be anywhere else than by his side.

They were blessed with a lot of sunlight in their lives, something she was always grateful for. But with the perspective of years, she further understood the truth…sometimes a cloudy sky really does make all the bright colors more beautiful.

One thought on “Like Rain on Your Wedding Day”